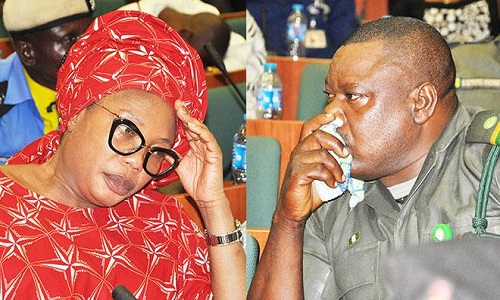 The House of Representatives Committee on Interior yesterday quizzed the Controller-General, Nigeria Prisons Service, NPS, Dr Peter Ekpendu over the alleged assault on a female lawmaker by his men last Wednesday.
The Reps member, Mrakpor Onyeamaechi Joan (PDP, Delta) was said to have been “assaulted and harassed” by an aide to Mr. Ekpendu after her vehicle reportedly blocked the Prisons boss’ convoy, who was at the National Assembly.
Following the alleged assault of the lawmaker, the House adopted a motion raised by its Minority leader, Leo Ogor, who came under a matter of privilege, summoning Ekpendu as well as the policemen and DSS personnel attached to the National Assembly and the Sergeant-at-arms before the interior committee, which was given today to submit its report.
Confirming that he was at the National Assembly complex on the day of the unfortunate incident, the prisons CG, however, said his vehicles had passed when the lawmaker was allegedly assaulted.
According to Ekpendu, it was the vehicles of two of his deputies that were involved in the incident.
He said: “I left the National Assembly complex to attend another assignment. I left in company of some officers, DCG Admin, Jafaru Ahmed and DCG Budget and Finance making it a total of 6 vehicles in the convoy.
“Before the incident, the escort, my vehicle and the backup had passed. So, I was never a witness to the incident. I had to be informed by the CG Civil Defence who called my attention to the report in his office the following day”.
The Prisons CG said he immediately instituted an investigation and issued a query to the affected officers the following day.
He said he had taken responsibility for all that happened and that if found guilty, “the punishment for those involved will not be anything less than dismissal as it is an embarrassment to the service”.
Mr. Ekpendu later apologized to the lawmakers for the incident.
Testifying before the committee, Rep. Joan said she was assaulted and insulted by a Senior Inspector of Prisons (SIP) Mr. Dan Odeh, at the exit gate to the National Assembly on that day.