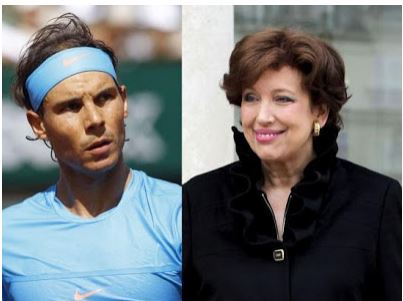 Tennis star Rafael Nadal has launched a defamation lawsuit against a former French Minister of Health after getting tired of allegations linking him to doping.

The World’s number 5 ranked tennis star in March warned that he won’t tolerate any more attacks on his integrity as a sportsman and has now launched a defamation suit against Roselyne Bachelot who served as French Health minister between 2007 and 2010.
Speaking on Canal+, Bachelot accused Nadal of taking seven months out of tennis between 2012 and 2013 because he had taken drugs.
“We know that the famous injury which kept Nadal out for seven months is without any doubt because he tested positive,” Bachelot said. “When you see a tennis player out of action for a long time, it’s usually because they’ve tested positive.”
On Monday the 14-time grand slam winner released a statement announcing the filing of a case against her, for her comments made on French television in March.
“Through this case, I intend not only to defend my integrity and my image as an athlete, but also the values I have defended all my career,” Nadal said in his press statement.
“I also wish to avoid any public figure from making insulting or false allegations against an athlete using the media, without any evidence or foundation, and to go unpunished.”
“I am going to sue her, and I am going to sue everyone who is going to comment something similar in future, because I am tired of that,” .