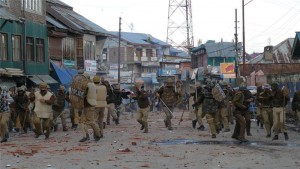 Hundreds of Kashmiris have taken to the streets, throwing rocks and chanting freedom slogans after Indian army troops shot dead at least two people during a protest against an alleged case of sexual harassment by a soldier.

The two men, Nayeem Ahmad and Muhammad Iqbal, were shot dead when a protest erupted on Tuesday following an allegation by local residents that an Indian soldier tried to sexually assault a young woman in the town of Handwara in the Kupwara district of Indian-administered Kashmir. “It started off with a small demonstration, and then hundreds of others joined. Protesters were demanding that the soldier [charged with sexually harassing a girl] be arrested and handed over to the people,” Zulkarnain Banday, a cousin of victim Nayeem Ahmad, said.

“When they refused, the army opened fire and fired tear gas at the protesters. It was then that protesters tried to burn the bunker,” Banday said from Handwara.  When Al Jazeera spoke to Banday, gunfire and screaming could still be heard in the background as running battles between protesters and police continued.  Banday described the situation in the town, some 50km away from the capital Srinagar, as very tense.

Police officials confirmed that the army killed two young men, while local media reports claimed that a young woman was also shot dead later on Tuesday evening, but it is still unclear who was responsible for her death.
Colonel NN Joshi, public relations officer for the Defence Ministry in Srinagar, told Al Jazeera that the army “regrets the loss of life and that the matter will be investigated. Anyone found guilty will be dealt with as per law […] all of this is a matter of investigation,” he said.