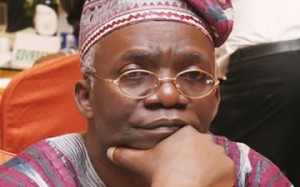 Lagos lawyer, Femi Falana (SAN) has urged the Federal Government to muster the political will and courage to recover over $200 billion stolen wealth of Nigeria withheld by some international oil companies instead of taking take a loan of $3.5 billion from the World Bank and the African Development Bank.

The request was contained in a letter dated April 8, 2016 addressed to the Minister of Finance and titled, “Request for the collection of outstanding revenue of $200 billion withheld from the federation account or stolen by looters”.

According to Falana, if the government refuse to accede to the request, “we shall have no alternative than to initiate legal proceedings at the Federal High Court with a view to restraining the Federal Government from further plunging the nation into external indebtedness.”

In his initial letter to the minister dated February 12, 2016, the lawyer urged the Federal Government to explore alternative sources of raising revenue to fund the 2016 budget instead of increasing the nation’s external debt of $64 billion.

Falana said the minister in his reply in a letter dated March 17, 2016 gave assurance that the issues raised in our letter were receiving the attention of the Federal Government.

“We were therefore surprised to learn that the Administration had applied to the Chinese Government for another loan of $2 billion. In urging the Federal Government to desist from taking the loan of $2 billion from China or any other country we are compelled to advise the Federal Government to intensify efforts to recover the nation’s wealth which has been criminally diverted by a handful of local and foreign looters”, he said.

Falana advised government to direct the relevant agencies and the anti graft bodies to collect the stolen wealth and listed 17 areas where such funds will be collected.

According to him, “the National Extractive Industries Transparency Initiative has confirmed that from five cycles of independent audit reports of NEITI covering 1999-2012 the Nigerian National Petroleum Corporation (NNPC), some oil companies and certain agencies of the federal government had withheld $20.2 billion for the Federation Account.

The indicted oil companies and agencies should be made to remit the said sum of $20.2 billion into the Federation Account.

“On September 6, 2016 the NNPC announced that arrangements had been concluded to recover the sum of $9.6 billion in over-deducted tax benefits from joint venture partners on major capital projects and oil swap contracts. Since the NNPC is said to have recovered the said sum of $9.6 billion it should be remitted into the Federation Account”.