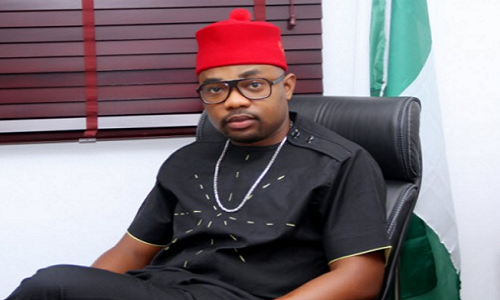 The House of Representatives has ordered the Department of State Services, DSS, to immediately release the President of Nigerian Youth Council, Mr. Ugochinyere Michael, or charge him to court, if it has any case against him.
The House also asked the DSS to make public the offences allegedly committed by Mr. Michael.
It would be recalled that the family of the incarcerated youth leader on Wednesday raised the alarm that Michael has not eaten any food since his arrest three days ago.
According to the family, Michael has refused any food or water brought to him by the DSS, claiming the secret police also denied them from taking food or water to their son, a development they said is taking a toll on his health.
Leading debate on his motion raised under matters of urgent public importance, Goodluck Opiah (PDP, Imo) expressed worries that the arrest of the youth leader was alleged to be because of a view he (Ugochinyere) expressed in a television interview on the trial of the Senate President, Dr. Bukola Saraki.
He said: “The House is worried that he has been harassed and intimidated for supporting the Senate President and taking the Minister of Youth and Sport to court in protection of his office as President of the National Youth Council of Nigeria.
“Section 39 of the 1999 Constitution of the Federal Republic of Nigeria guarantees the freedom of opinion of all Nigerians, including Mr. Ugochinyere Michael.
“Section 35 further guarantees the right to personal liberty of Mr. Ugochinyere and we are worried that he has been held for more than 48 hours by the men of the DSS”.