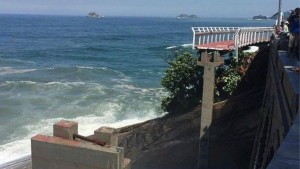 Part of a coastal cycleway in the Brazilian city of Rio de Janeiro has collapsed, killing at least two people. Witnesses said five people were on the path when about 50m (150ft) crumbled into the shoreline, in late morning local time. Search operations are now under way. The elevated path was built ahead of the Rio Olympics this summer. The cause of the collapse is not yet known.

No events were planned for the bike lane, which opened earlier this year. It was built on metal stilts, next to a seafront road. An eyewitness, Damiao Pinheiro, told O Globo newspaper (in Portuguese) the waves were “huge”. He said: “People stopped on the bike lane. They were taking pictures of the waves – they were huge. Then I saw the biggest one ever.

“It lifted the cycleway and a piece came off. I saw the people falling. It is really sad.” Two bodies were recovered from the sea and laid out on the beach. Ademir Guedes told O Globo he was cycling along the route before being alerted to the danger.

“I thought he was joking. I never imagined a newly built bike path would collapse. I went slowly to the edge of the cliff. Then drivers started shouting at me warning of the risk.” Rio de Janeiro has committed to linking up all the city’s coastal bike lanes ahead of the Olympic Games. Work started in January 2014. This section of the project was opened in January and cost 45m reais ($13m; £8m).