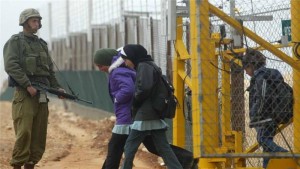 A jabbing pain in his shoulder and thigh roused Obada from his sleep at 3am. In the half-light, the 15-year-old could make out eight masked men surrounding his bed, their rifles pointed at him. “I felt terrified,” he said of the experience of being arrested in February from his home in the village of al-Araqa, near Jenin in the northern West Bank.

Obada is one of more than 100 Palestinian children who, in recent months, have found themselves dragged from bed at gunpoint in the middle of the night by Israeli soldiers, according to children’s right groups. Testimonies like Obada’s feature in a new report, No Way to Treat a Child, compiled by Defence for Children International – Palestine (DCIP), a group monitoring Israeli violations of Palestinian children’s rights.

The 440 children currently in military detention are the highest total since the Israeli army started issuing figures in 2008 – and more than double the number detained this time last year.  The rights group says that, despite promises two years ago from the Israeli army to phase out night raids following international condemnation, in practice, they are used as routinely as ever.

During his arrest, Obada said he was hit with a rifle butt, blindfolded and his hands tied with a plastic cord that cut into his flesh. “The soldiers dragged me out of the house without allowing me to say goodbye to my family and without telling me why and where they were taking me,” he said. Over the next fortnight, according to Obada, he was repeatedly beaten. Indignities included being locked overnight in a small toilet cubicle and assaulted with a taser when he protested.