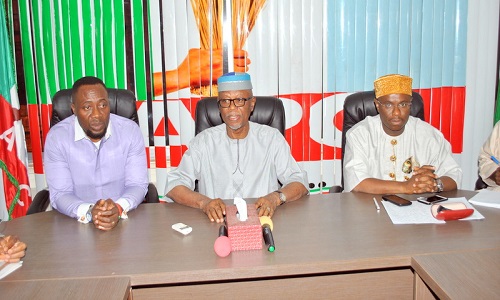 The All Progressives Congress, APC, in Rivers State has said after a careful analysis of the facts on ground, it has come to the conclusion that the March 19 National and State Assembly rerun elections in Rivers were nothing but mere allocation of votes to the ruling party in the State, the Peoples Democratic Party (PDP), by the Independent National Electoral Commission (INEC).
The party also said the INEC officials did so to avoid being killed by the state governor, Nyesom Wike and his gang of killers.

The Rivers APC Chairman, Dr. Davies Ikanya, who made the party’s position known in a statement on Sunday in Port Harcourt, the state capital, outrightly rejected the results so far announced by the electoral commission.
Mr. Ikanya said nothing short of total cancellation of the process and the holding of fresh rerun polls would be acceptable to Rivers APC.
“We wish to put on record our total and uncompromising rejection of the results of the March 19, 2016 rerun elections so far announced by INEC as these do not in any way reflect the current political realities on ground in Rivers State.
“These results, which indicate a mysterious landslide victory for PDP, were allocated to the ruling party in the State following unrelenting threats by Governor Nyesom Wike to the effect that anybody coming to conduct any election that would not favour PDP should first write their wills before coming to the State.
“The effect of these threats and their practical demonstration as seen in how people were burnt, beheaded and buried alive during the rerun elections can clearly be seen in the shameful manner INEC is awarding victory to PDP”, he said.
The party said there was nothing different between what happened on March 19, 2016 and during the widely discredited elections of March 28 and April 11, 2015 cancelled by the courts, which also ordered the rerun elections.

It said this was not a coincidence considering that the apparatus used for both elections were basically the same.
“From the Police leadership to most of the INEC officials and INEC ad-hoc staff, the characters that organised the 2015 general elections were the same characters that organised the March 19, 2016 rerun elections and it will be foolhardy to expect any different result. All these characters were set up by the former disgraced PDP administration rejected by Nigerians during the 2015 polls”, Rivers APC said.
Mr. Ikanya also lampooned Governor Wike for claiming that APC was not in a position to win an election in the State, and for accusing Minister of Transportation, Rotimi Amaechi, of sponsoring violence in the state in a bid to remain politically relevant.
“Everyone knows that Wike is the one who has been sponsoring violence in Rivers State and not Amaechi”, the APC chair said, adding: “If Amaechi did not employ violence as Governor of Rivers State to stop Wike from succeeding him in 2015, is it now that he is far away in Abuja as a Minister of the Federal Republic of Nigeria that he would do so?
“Rather than the vain attempt to drag his name into the mud, Amaechi should be commended for not encouraging APC members to retaliate the wanton killing of its members by PDP, which would have turned Rivers State into another Somalia.
“If Wike feels that he is very popular let him allow free and fair election devoid of his gang of killers and he will see how he is hated in Rivers State.
“Time will tell the heroic role played by Amaechi in this dispensation. As we watch the macabre dance in Rivers State, we expect the APC Government at the centre not to allow PDP to decimate our ranks any further in view of the strategic roles we played in freeing Nigeria from the inept PDP administration that would have completely grounded the country if it was reelected”.