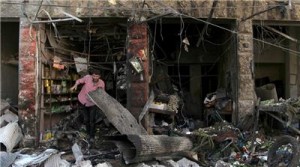 Five rockets have hit the Turkish province of Kilis near the Syrian border, killing one person and injuring 26,  in the latest attack launched from a Syrian area controlled by the Islamic State of iraq and the Levant (ISIL, also known as ISIS), officials said.

Three more hit Kilis in late afternoon, killing one person and wounding 10 others. Akdogan said 45 rocket rounds have been fired at Kilis since January 18 and killed 16 people, including Sunday’s fatality. At least 62 people have been wounded since then.

The Turkish military systematically responds by firing back at targets in Syria, in line with its rules of engagement, and Akdogan said Turkish artillery “immediately” retaliated to the rocket fire after the latest attack. “Their [the army’s] intervention is continuing … I am calling for our citizens to be calm,” Akdogan said in televised comments..

“All measures will be taken in this regard. Unfortunately there is no authority across our border.” Akdogan said measures would be announced after a cabinet meeting on Monday. Police used water cannon to disperse residents who were protesting what they said was the government’s lack of action after the attacks, Turkey’s Dogan new agency reported.