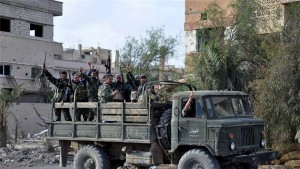 Russian combat engineers arrived in Syria on a mine-clearing mission in the ancient town of Palmyra after it was recaptured from Islamic State of Iraq and the Levant (ISIL) this week. On Thursday, the Defence Ministry said sapper units were airlifted to Syria with equipment including state-of-the-art robotic devices to defuse mines at the 2,000-year-old archaeological site.

Russian television stations showed Il-76 transport planes with the engineers landing before dawn at the Russian air base in Syria. Sunday’s recapture of Palmyra by Syrian troops under the cover of Russian air strikes was an important victory over ISIL fighters, who controlled the area for 10 months. Lieutenant General Sergei Rudskoi of the military’s General Staff said Russian advisers helped plan and direct the Syrian army’s operation to recapture Palmyra.

He said Russian warplanes had flown about 500 combat missions from March 7 to March 27, striking 2,000 targets around Palmyra, including artillery positions and fortifications. The Russian jets also hit ISIL fighters as they tried to flee towards their strongholds of Raqqa and Deir Ezzor, Rudskoi added.

The high number of sorties flown in support of the offensive on Palmyra demonstrated Russia’s ability to provide strong backing to Syrian President Bashar Assad’s military despite a partial pullout of combat jets from Syria earlier this month. President Vladimir Putin has said the drawdown should help the Syria peace talks that began in Geneva, but he has vowed to continue fighting ISIL and the al-Qaeda-linked al-Nusra Front group.