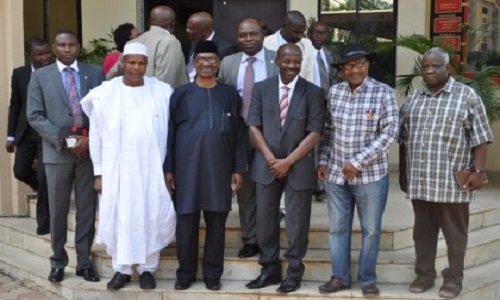 Constitutional expert and Chairman of the Presidential Advisory Committee on Corruption, Professor Itse Sagay, has charged the Economic and Financial Crimes Commission, EFCC, not to relent in carrying out its mandate of ridding the country of economic and financial crimes.
Mr. Sagay, who gave the charge when he led some members of the committee to the EFCC headquarters in Abuja, on Thursday, also stressed the pivotal role the anti-graft agency has to play in winning the war against corruption.
“The common interest of Nigerians is at stake, because corruption affects everyone, and we have the same objective, therefore you can rely on us to give you support in all ramifications”, a statement issued by the Head, Media and Publicity of the EFCC, Wilson Uwujaren, quoted him as saying during the visit.
While commending the acting chairman of the EFCC, Ibrahim Magu, for re-energising the anti-graft agency, Mr. Sagay noted that there was still much to be done.
“The energy you have brought in to the activities of the EFCC since your assumption of office has encouraged us, and we want you to continue to do more,” he said.
Re-echoing the views of Mr. Sagay, the committee’s secretary, Bolaji Owasanoye, stressed the importance of securing convictions in cases involving high profile individuals.
“We commend you for your efforts, but there is need to further enhance the good work you are doing by securing convictions in high profile cases”, he said.
Reassuring the committee of the Commission’s resolve not to relent in its efforts, Mr. Magu used the opportunity to intimate the committee of some of the reforms he has initiated.
“We are restructuring the operations aspect of the Commission and weeding out the bad eggs”, he said. “We are also carrying the anti-corruption crusade to the grassroots”.
Magu added that the efforts of the agency were yielding results, noting that the EFCC was determined to get to the root of major corruption cases in the country, including the Halliburton case.
“We are getting back the confidence we have been lacking,” he said.
He further told the committee that the Commission was facing a major problem with regards to accommodation, and there was a need to have an Academy equipped to international standards.
Other members of the committee at the meeting include Sadiq Isa Radda, E. Alemika, Femi Odekunle, Ona Peters, Ola Olukayode, and Olusegun Odesina.