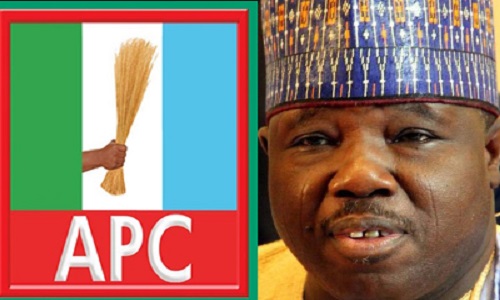 The South East chapter of the All Progressives Congress (APC) says it will not stop blaming the present economic woes of the country on the 16 years rule of the Peoples Democratic Party (PDP).

The national chairman of the PDP, Senator Ali Modu Sheriff, on Tuesday, told the APC to stop blaming PDP for its problems, especially the lingering fuel crisis, advising the governing party to face “Nigeria’s problem”.

But the Spokesman of the South East Caucus, Osita Okechukwu, in reaction to the comment, told Sheriff that APC will continue to bash the PDP for failing to transform the country despite huge oil revenues it received.

Mr. Okechukwu described the statement as “sheer bunkum meant to cover the deep wound inflicted on the soul of Nigerians”.

He said, “In all honesty, how can the APC or President Muhammadu Buhari stop bashing the unconscionable PDP-led federal government of the last 16 years that dislocated our economy? As Buhari said, the PDP squandered our rainy-day commonwealth which accrued in bounty seasons of crude oil sales. It’s hard fact and fact is sacred.

“How can we forget the 1,310 kilometer old gauge Kano-Lagos rail; the $8.3 billion contract awarded to the Chinese, when almost at the same time the Chinese awarded 4,000 kilometer modern gauge Lhasa-Beijing at $4.2 billion?

This could have tremendously improved North-South transportation.

“How can we forget the $23 billion Greenfield refineries awarded to the Chinese in 2010, which was dead on arrival?

This could have stopped the billions wasted on petroleum products importation.

“How do we forget the Lagos-Abeokuta, Lagos-Ibadan, Lagos-Benin, Kano-Maiduguri, Maiduguri-Yola, Enugu-Onitsha, Enugu-Port Harcourt, East-West and other federal roads abandoned by the PDP federal government? This has crippled economic activities nationwide.

“How can we forget the $16 billion PDP squandered on power projects? The PDP has kept us in the dark”.