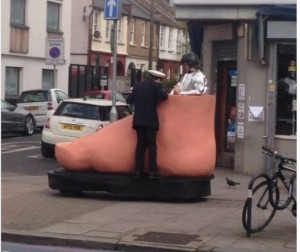 Members of a British police department were left scratching their heads when an officer snapped a picture of an unusual motor vehicle — a giant foot. The photo, posted to Twitter by police in London’s Wandsworth borough, shows a man driving the giant, motorized foot Sunday while a woman in a captain’s uniform assists him.

“Spotted near Balham Tube, a typical day in Wandsworth…(anyone have an explanation?)” the tweet read. Twitter users dug into the mystery of the mobile foot and discovered the footmobile was a promotion for the Wandsworth Arts Fringe festival.

The festival said the foot was masterminded by the “Ministry of Silly Ideas.” Another Twitter user who spotted the strange vehicle riding around town shared — ahem — footage of the vehicle in motion.