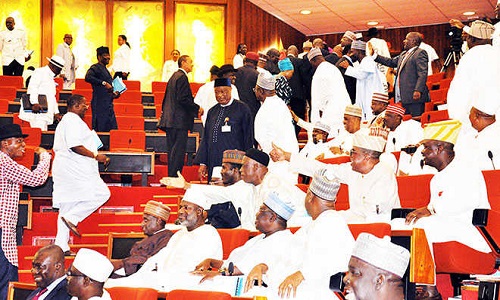 In line with its decision to reunite all senators across party lines, the Senate on Thursday inaugurated a 12-member peace panel to address issues affecting the smooth running of the upper legislative chamber.
The peace panel was inaugurated by the Senate leader, Ali Ndume.
In a brief remark during the inauguration, Ndume said the committee has one week to complete its assignment, within which it would resolve all contentious issues within and outside the senate.
The committee is made up of two senators each from the six geo-political zones of the country.
They are: Godswill Akpabio and James Manager (South-south); Sani Yerima and Suleiman Hunkuyi (North-west); Bukar Abba Ibrahim and Joshua Lidani (North-east); Sam Egwu and Hope Uzodinma (South-east); Barnabas Gemade and Abdullahi Adamu (North-central) and Monsurat Sumonu and Gbenga Ashafa (South-west).
It would be recalled that the senators during a closed-door session on Wednesday, resolved to set aside their differences and forge a common front in the national interest.