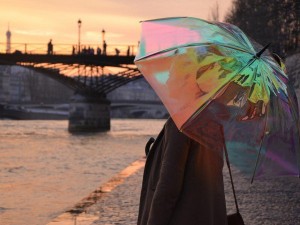 Giving Mary Poppins’s magic umbrella some serious competition is the all new high-tech ‘Oombrella’ – not only can it predict the weather, it’s also impossible to lose. The smart umbrella syncs with a smartphone app, sending users updates about weather conditions 30 minutes in advance, and reminders if they happen to leave the device behind. And here’s the added bonus – it won’t ever flip inside-out.

Designed by French company Wezzoo, the rainbow-colored Oombrella comes in two versions – classic and modern. The classic is 3.1-ft long with a curved handle, while the modern version is 0.8-ft long with a straight handle. The company describes the device as a ‘portable weather station’, made of a reflective surface with built in sensors that record real-time data such as light, humidity, pressure, and temperature. The Oombrella collects and processes this data as well as information from a social media community before sending out alerts about when it’s going to start raining.

And if the user happens to accidentally forget it at home on a potentially rainy day, or leaves it in a restaurant, similar alerts will be sent out using GPS technology to make sure you don’t lose it. “We wanted to make this umbrella unforgettable in terms of design, too,” explains Alexandre, of Escabo design studio. “We developed an exclusive material. It makes you feel you are holding an aurora borealis in your hands. It has effects that are amazing with the light and always changing. It really makes the Oombrella special.” The ‘capsule’ that integrates all the technology, making the umbrella smart, is located in the handle.

The Oombrella is all set to hit global online and physical stores this fall. According to a company spokesperson, it will retail at €79 ($86), but the early bird price on Kickstarter is €59 ($64). For those who are rather attached to their current umbrellas, the company will also release an ‘Oombrella capsule’ that can convert any umbrella into a smart device. Now, if only it could make us fly like Mary Poppins!

Share
Facebook
Twitter
WhatsApp
Previous articleIdentical Twin Brothers Who Married Identical Twin Sisters to Get Plastic Surgery So They Can Tell Each Other Apart
Next articleCaroline Danjuma is suicidal?!? Read the very sad poem she posted on Instagram
- Advertisement -