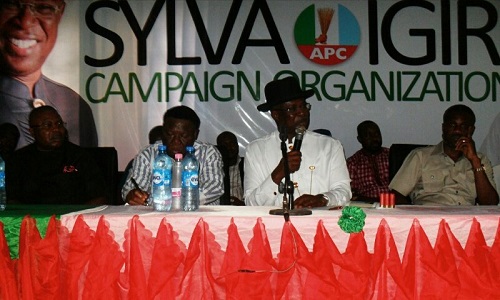 The South-South zonal chapter of the All Progressives Congress (APC) has declared as null and void, last Saturday’s suspension of former Governor Timipre Sylva and four others by the leadership of the Bayelsa State chapter of the party.

However, the South-South National Vice Chairman of the APC, Prince Hilliard Eta, directed those involved in the suspension and counter-suspension of the party’s members and officials to maintain the status quo ante, pending the conclusion of investigations.

In a statement yesterday in Abuja, Mr. Eta expressed sadness over the ongoing crisis in the Bayelsa chapter of the party, saying it was regrettable that the APC was embroiled in crisis at a time party chieftains were expected to be united and face the election petitions arising from the last governorship rerun polls in the state.

He said: “The spate of suspensions, counter suspensions and general disorganization of the Bayelsa State chapter of our great party – the APC – is disheartening. That the chapter could be on the warpath at a time that it should be cohesively charting ways to successfully prosecute the election petition tribunal case concerning the recently held gubernatorial election in which Seriake Dickson supposedly won is even more saddening.

“As the chairman of the party in the zone, I am particularly miffed by the state of affairs in Bayelsa APC and I publicly exhort the aggrieved parties to sheath their swords.

“Going by the provisions of Article 21 of the amended constitution of our party, the suspensions are null and void and done in bad faith. In the said article, our constitution lucidly outlines the steps to be diligently followed for a party member or executive to be suspended.

“In the light of the above, the suspensions going on in Bayelsa as far as the party is concerned are entirely null and void. In the interest of the entire party and those immediately concerned, the state chapter of the party should revert to the status quo ante”, the statement said.

It also stated that, “The zonal organ has delegated a committee to examine the remote and immediate causes of the rift and when the committee submits its findings, we shall take appropriate measures to reconcile the different interests. In the spirit of Change, let there be peace”, he said.

But in a swift reaction yesterday, the state party chairman and secretary, Chief Orunimighe and Comrade Marlin jointly urged the people to disregard the denouncement of the suspension on Sylva and four others by the South-South chapter of the party.

In a statement in Abuja, Orunimighe said APC’s National Working Committee (NWC) had not met on the matter and had not made any pronouncement.

He insisted that the suspension of Sylva remained, pending the outcome of investigations.