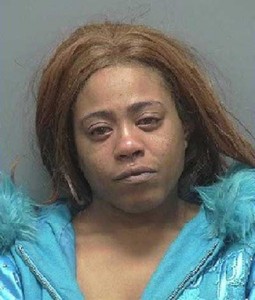 The perils of strip clubs have been exhaustively chronicled in these pages, from lap dance disputes and stiletto assaults to genital crushing and the tale of how a dancer named Chocolate Chambers once robbed a patron outside Club Boom Boom. So, in that vein, meet Wisconsinite Mesheokia White. According to a Rock County Sheriff’s Office report, deputies were dispatched early Thursday to the Diamond Jim’s strip club in response to a battery complaint. Specifically, a customer reported that he was “bitten in the crotch by a dancer.”

Derick Roth, 24, told investigators that he had “given a dancer a few dollars to do her thing.” The dancer, Roth added, “placed her head into his crotch and was moving it around.” In this case, “it” appears to have been the dancer’s head. But the 1:45 AM performance would grind to a halt when the dancer, later  identified as the 29-year-old White, allegedly bit Roth in the crotch.

When questioned by deputies, White (seen above) appeared intoxicated and “didn’t remember anything I was talking about,” a deputy reported. A subsequent review of security footage “confirmed Derick’s story,”according to the report. As a result, White was arrested for battery and booked into the county jail.

The report does not disclose the extent of any injuries suffered by Roth as a result of the alleged biting at Diamond Jim’s, a gentlemen’s club that features fully nude dancers and recently installed “Nearly $1k of new dynamic lighting systems.” Additionally, during snowy months, Diamond Jim’s offers free admission to any patron who rides their snowmobile to the club (though you must show your snowmobile keys).