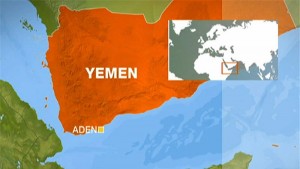 A suicide bomber detonated an explosives belt near a football stadium in the southern Yemeni city of Aden, killing at least four people, witnesses have said. Eight people were wounded in the attack on Tuesday, which appeared to target young men queuing to sign up for the military.

The witnesses told the Associated Press news agency that the four people killed were in addition to the bomber. The attack comes during a ceasefire, and a day before peace talks aimed at ending more than a year of war in a country that has become a subject of dispute for regional powers Saudi Arabia and Iran.

A UN spokeswoman, Stephane Dujarric, on Monday said the truce appeared to be holding despite “pockets of violence”.  A Saudi-led coalition and an Iranian-allied Houthi rebel movement have blamed each other for those incidents, both reiterating their commitment to respecting the cessation of hostilities. The UN-sponsored talks are due to start on April 18 in Kuwait, bringing together the Houthis and the Saudi-backed government.

The Houthis forced the government out of the capital Sanaa in 2014, in what they said was a revolution against corruption. Saudi Arabia and allied states began an air campaign in March of last year to stop the Houthis and forces loyal to ex-president Ali Abdullah Saleh from taking control of the whole country. More than 6,200 Yemenis have been killed in the war.