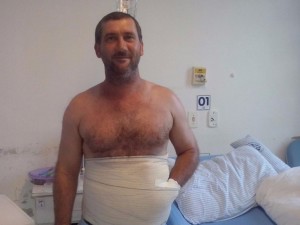 Ingenious surgeons have helped save a Brazilian man’s hand from being amputated by putting it inside a ‘pocket’ in his belly.  Doctors decided to bury Carlos Mariotti’s left hand inside his abdomen and cover it with a flap of protective skin, after the machine production operator suffered a horrific work accident that ripped off all the skin on his hand. The 42-year-old who lives in Orleans in the south of Brazil, must now keep his damaged hand inside the soft tissue pouch for six weeks.

Orthopaedic and traumatology doctor, Boris Brandao, who performed the rare operation, explained: “(Mr Marriott) suffered a de-gloving injury which left him with very little skin on the palm and back of his hand, exposing the bones and tendons inside. “This was a very large and delicate injury and the only place we could fit the whole hand was in the abdomen. Without this procedure, there would be a high risk of infection and the tissue and tendons would rot away,” Dr Brandao said.

Mr Mariotti who remains hospitalised in the Santa Otília Hospital said he is a very lucky man: “I still get very emotional when I think about the accident. But it was only when doctors told me I could lose my hand that I realised the gravity of the situation. “When I woke up from the operation I didn’t know whether it was still there. I couldn’t believe it when they said they had tucked my hand inside me.”

Heavy bandages around the man’s midriff keeps his arm firmly in place. But doctors have warned that he must move the hand “gently around to avoid [it] becoming stiff.”  “It’s a really weird feeling trying to wiggle my fingers inside my body and creepy seeing my tummy protrude slightly as I prod around,” Mr Mariotti said.