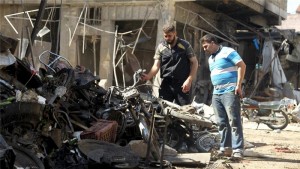 Air strikes on two markets in northwest Syria have killed more than 50 people, local sources told Al Jazeera, as Syria’s opposition negotiators said that they were leaving peace talks held in Geneva. The strikes were among the deadliest since a ceasefire took effect in Syria at the end of February, Rami Abdulrahman, chief of the UK-based Syrian Observatory for Human Rights, said.

The opposition’s Higher Negotiations Committee (HNC) announced that its delegation was leaving Geneva because no advances were made in the talks. Riad Hijab, the head of the HNC, had earlier warned that the delegation would leave Switzerland if the attacks on rebel-held towns would not stop.

It was not clear if Tuesday’s air strikes were carried out by Syrian or Russian war planes that have been deployed to Syria to support Syrian President Bashar al-Assad. The rescue workers said more than 40 people were killed in the town of Maarat al-Numan in the rebel stronghold of Idlib province.

Another 10 people were killed in an air strike on a market in the nearby town of Kafr Nubl. The deaths from the latest strike included five children, sources told Al Jazeera.  “We have more than 20 cars that have been moving dead and injured to hospitals in the area,” said Ahmad Sheikho, a member of the civil defence corps, a rescue service operating in opposition-held territory.