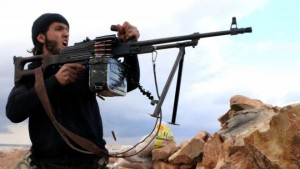 Syrian rebels have seized control of the dorminant northern town of al-Rai from so-called Islamic State (IS). The fall of the town is a boost for the rebels as they battle to capture the divided city of Aleppo. Al-Rai’s capture after several days of heavy fighting secures an important supply line from Turkey for the rebels.

Separately, at least 200 people are missing after an IS attack on a factory near Damascus, the government says. Workers were reportedly taken from a dormitory where they were staying on the outskirts of the town of Dumeir, about 40km (25 miles) east of the capital.  Activists from the UK-based Syrian Observatory for Human Rights say about 140 workers managed to escape.

Initially there was confusion over who attacked the factory, with some sources suggesting the abductions were carried out by a rebel group called Jaysh Tahrir al-Sham. A factory administrator said no-one had been able to contact the workers since the assault on Monday. The area around Dumeir has seen fierce fighting between government forces and IS militants in recent days. The BBC’s Lina Sinjab in Lebanon says that al-Rai is a crucial stronghold for IS as it sits on a crossing linking Turkey to Syria.

The Observatory said that an alliance of “rebel factions and Islamists” had captured the town. Control of al-Rai allows opposition fighters to lay siege to positions held by IS to the north of Aleppo and cut the group’s supply lines, a commander of the opposition al-Mutasim Brigade was quoted as telling local media. Al-Rai can now be be used by opposition groups as a launching pad for future operations against IS in the east and south, the commander, Mohamed Hassan Khalil, added. He said that the main dangers faced by the opposition groups fighting IS were improvised mines, booby-trapped vehicles and suicide bombers.