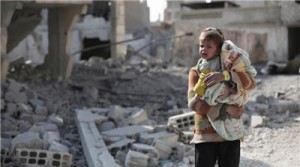 At least 30,000 civilians have fled camps for displaced people in northern Syria after they were overrun by the Islamic State of Iraq and the Levant (ISIL), according to Human Rights Watch. The US-based rights group urged Turkey to open its border to the civilians fleeing fighting between ISIL, also known and ISIS, and opposition rebels.

Human Rights Watch also accused Turkish border guards of shooting at some of those displaced in Aleppo province as they approached the frontier. Turkey has, however, denied the accusation.

“Civilians were trying to flee but some were met with gunfire or told they would not be able to enter,” Nadim Houry, deputy director of Human Rights Watch Middle East and North Africa division, told Al Jazeera from Beirut in neighbouring Lebanon on Friday. “Those people need to be allowed with safety. The whole world is talking about fighting ISIS, and yet people who are escaping them are not welcomed anywhere.”

Turkey allows Syrians who are in urgent need of medical care to enter the country. A senior Turkish official denied the claims of border guards opening fire at refugees. The official told Al Jazeera that sometimes smugglers and armed men infiltrate groups of refugees, so they are firing at them, not refugees. Aid workers told Human Rights Watch that three camps – Ikdah, Harameen and al-Sham – near the town of Azaz were completely empty after attacks by ISIL. The head of Ikdah camp, on the Turkish border, said ISIL had taken over the camp early on Thursday, firing shots in the air and telling residents to leave.

Doctors Without Borders (MSF) said it was “extremely worried” about the security of those displaced and access to healthcare. The surge in violence came as representatives of Syrian President Bashar al-Assad’s regime arrived in Geneva on Friday for the latest round of talks aimed at ending the war.