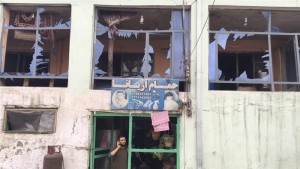 A senior member of Afghan Taliban has said that the group is not interested if Afghan government officials are attending the Pakistan talks on stuttering peace process with Kabul. “We don’t care if Kabul participates in the meeting, as we already launched our spring offensive and are getting successes against them,” Reuters news agency quoted a Taliban official as saying

The comments on Tuesday followed the arrival of a Qatari-based Taliban delegation in Pakistan to meet Pakistani officials. A senior Taliban member based in Pakistan confirmed that a delegation of leaders was in the southern port city of Karachi, holding talks with Pakistani officials. “They arrived on Monday,” he said, speaking on condition of anonymity, because the Taliban leadership has not authorised him to discuss the talks with the media.

Two members of the Taliban’s political office in Qatar, which has played a role in previous attempted peace talks, confirmed the delegation’s presence in Pakistan. “Our people held a meeting with Pakistani officials and I am sure they may meet the Chinese on Tuesday,” said one of the Qatar-based leaders, speaking on condition of anonymity, also because he is not authorised to discuss the talks.

In Kabul, the Afghan government has been frustrated by what it sees as Islamabad’s refusal to honour a pledge to force Taliban leaders based in Pakistan to join the talks, or face military action. “We are aware that Taliban delegations are in Pakistan, but we will not go there until Pakistan fulfils the promises that they made,” said Dawa Khan Mina Pal, a spokesman for Afghan president Ashraf Ghani. On Monday, Ghani said the opportunity for peace talks “will not be there forever” and urged Pakistan to fight Taliban groups on its soil that rejected peace.