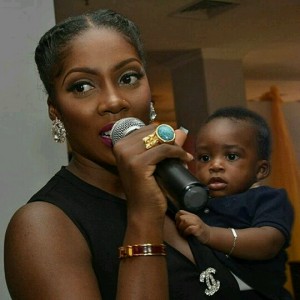 Famous Nigerian singer, Tiwa Savage is definitely enjoying her new status as a mother since welcoming her son in 2015.

Although she she is so overjoyed, the singer says childbirth almost ruined her bedroom life with husband Tee Billz.

In a recent chat with Saturday Beats, 36-year-old Tiwa admits she diverted a lot of attention to her child but still loves her husband and gives him the much required attention.

She said: “Initially when I gave birth to my son, the attention naturally shifted to Jamal because he would always wake up every two hours as such, you have to give him all the attention. Child birth may make your sex life not to be interesting any longer and it may change your sex life. You may have stretch marks in places you don’t like but eventually for the sake of your marriage, I  would encourage every woman to look after their husband as well especially after having a child.

“My husband and I have always been very good friends before marriage and we are still good friends. You have to know that you are living for someone else in a marriage so you cannot make selfish decisions. For example, if I need to make any important decision in my life, I need to consult my husband because he is the head of the family. Ultimately, I need to give him that respect because he has the final say,” she said.

Tiwa said she cannot forget in a hurry a scary experience she had concerning her son.
“The scariest moment I have faced as a mother was when I was in the delivery room and the doctor told me that the heart rate of my child had dropped and they had to do a quick suction to get his heart beating again. My happiest moment as a mother was the first moment I saw my son in the hospital,” she said.

On her fans base reducing due to marriage and childbirth
There were speculations that her fan base reduced drastically after her child birth. But she shut down the allegation saying:

“Numbers do not lie, since I gave birth, my Instagram followers have increased to about 1.4 million and I have 1.5 million followers on twitter. I would actually say that my baby has been a blessing to me. It has not been easy but I have a handsome son and I would do whatever it takes and make any sacrifice to give him the best and that is why I am working hard in my career,” she said.

On competition and comparison with Yemi Alade
Tiwa’s brief hiatus during her pregnancy and as a nursing mother, many would think, provided a vacuum that Jonny crooner, Yemi Alade, conveniently filled up. Now, Yemi is seen as one of Tiwa’s greatest rivals.

Tiwa explained that it is only natural for two successful people to be compared but she denied having any rift with Yemi.

She said, “I am aware about the comparison but it happens in any industry for artistes to be compared with their counterparts. We have the case of Davido and Wizkid, Beyonce and Rihanna, among others. It is just natural when you have two people doing great things. There is actually no beef between me and Yemi.

“I love what she is doing and she also loves what I am doing. We do not have any collaboration together now and we are not working on any project but if it happens, God willing, I would be happy to be a part of it.”