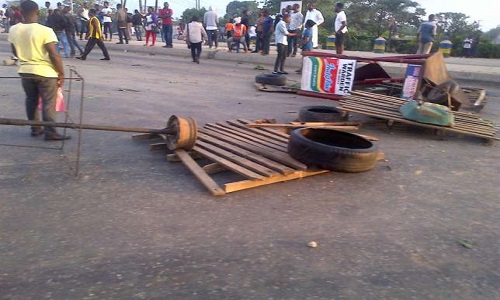 The Rivers State chapter of the Trade Union Congress, TUC, has urged the Federal Government to, as a matter of urgency, set up a probe panel to unravel the identity of the killer of a final year student of the University of Port Harcourt during Monday’s protest against fees’ hike by the institution.
Some students of the institution on social media blamed a trigger-happy policeman for the killing of Ofurum Peter, who until his untimely death, was President of the Faculty of Management Science of UNIPORT.
The Rivers TUC Chairman, Comrade Chika Unuegbu, in a statement Tuesday, called on all Nigerians of good conscience to condemn the killing of the student in cold-blood.
The TUC, which called on the relevant authorities to identify and prosecute those who killed Mr. Peter, vowed to withdraw the services of all its members in the state if its demands are not met after 14 days.
The statement said: “The TUC, Rivers State, condemns in its entirety, the unwarranted killing of a student of the University of Port Harcourt during a peaceful protest. We are worried that if these unarmed protesting students could be killed in cold blood, then there is no guarantee that protesting workers or citizens will not be killed.
“We call on the authorities of the University of Port Harcourt, the Rivers State Commissioner of Police, the Inspector General of Police and the Minister of Education to as a matter of urgency identify and prosecute those who killed the student. We note that students all over the world have the right to protest. And as a matter of fact, the right to peaceful protest is protected by the Nigerian constitution.
“We want to state categorically that if after 14 days our demand is not met, we shall convene an emergency TUC State Council meeting and invite the State Council to take a decision on this matter including the decision to withdraw the services of all our members in Rivers State.
“We appeal to all parents, civil society organisations and people of good conscience to rise up against unwarranted and cold blooded killings in the country”.