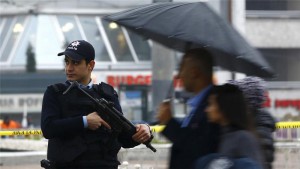 The United States and Israel on Saturday warned their citizens of a high-level, imminent threat of attacks in Turkey – urging them to immediately leave the country. Turkey has been rocked by four suicide bombings already this year, the most recent last month in Istanbul. Two of those have been blamed on Islamic State of Iraq and the Levant (ISIL), while Kurdish fighters have claimed responsibility for the other two.

The US embassy emailed what it called an “emergency message” to Americans, warning of “credible threats” to tourist areas in Istanbul and the resort city of Antalya. Israel announced “immediate risks”. “The US Mission in Turkey would like to inform US citizens that there are credible threats to tourist areas, in particular to public squares and docks in Istanbul and Antalya,” it said.

Later on Saturday, three people were slightly wounded after a small bomb left on the side of a road exploded in Istanbul’s central Mecidiyekoy district, Turkey’s state-run Anadolu news agency reported. The blast came from a non-lethal stun grenade, designed to create a loud noise and blinding flash. The three victims were taken to the hospital.