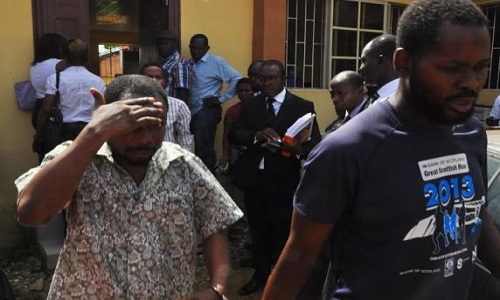 The Department of State Security (DSS) Wednesday arraigned two artisans before an Isolo Magistrate Court in Lagos State, for allegedly cloning the mobile line of Governor Akinwunmi Ambode.
The suspects – Rilwanu Jamiu and Balogun Stanley Oyewole – who claimed to be a cocoa dealer, were said to have attempted to perfect a N50 million transfer with the said mobile line before they were busted.
This was contained in a press statement signed by the Deputy Director, Public Affairs of the Lagos Ministry of Justice, Bola Akingbade.
According to the statement, the prosecuting counsel from the DSS, Mr. Peter Okerinmodun, told Chief Magistrate Adeola Adedayo that the suspects were arrested after using the cloned mobile line of the Governor to send a text message to the Accountant General of the State requesting for transfer of N50 million.
He said the suspects conspired with others now at large to commit the crime on February 10, 2016 at about 10:02hours.
Count one read: “That you Rilwanu Jamiu (M) of No 10, Giwa Street, Oka Akoko Street, Lagos and Balogun Stanley Oyewole (M) of No 65, Unity Street, Ikotun, Lagos and others at large on 10th February, 2016 about 1002hours at Lagos within Lagos Magisterial District, conspired to commit felony to wit: obtaining by false pretence and thereby committed an offence punishable under Section 312 (2) and (3) of the Criminal Laws of Lagos State”.
Count two read: “That you Rilwanu Jamiu, Balogun Stanley Oyewole of the above addresses, and others at large, on above date, time and place fraudulently cloned the Glo line of His Excellency, the Governor of Lagos State, Mr. Akinwunmi Ambode, with intent to induce him by false pretence and used the Glo line to send a text message for the transfer of a sum of fifty million Naira (N50m) and thereby committed an offence punishable under Section 312 (2) and (3) of the Criminal Laws of Lagos State”.
After the charges were read to the accused persons, they pleaded not guilty, while the prosecutor asked that they should be kept in protective custody pending the outcome of the legal advice of the Directorate of Public Prosecution (DPP) in view of the fact that their lives could be endangered by other suspects who are on the run.
But Magistrate Adedayo overruled Okerinmodun, saying the DSS ought to have kept them in custody judging by the fact that their lives could be in danger.
She said since the offence for which the accused persons were charged to court was bailable and the fact that the Magistrate Court is a court of summary trial, she was inclined to grant bail to the accused persons.
She, therefore, admitted them to bail in the sum of N1 million each and two sureties in like sum.
The magistrate ruled that one of the sureties must be a religious or community leader within the jurisdiction of the court, and that the accused persons must provide five years tax clearance certificates.
Mrs. Adedayo ordered the accused persons to be remanded in Kirikiri Prison pending the perfection of the conditions attached to their bail, and adjourned the matter to May 10.