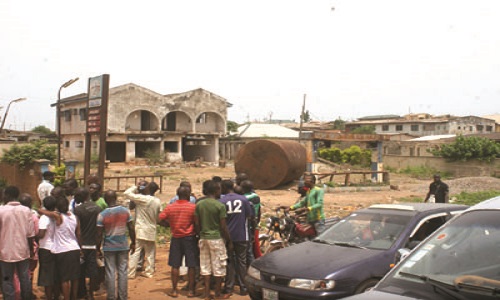 Another ritualist den has been uncovered by the Ogun State Police Command at Iyana-Ilogbo, Ota.
The police arrested two men – Babatunde Taofeek and Hammed Hassan – at the den, which is an abandoned Ayokunnu Filling Station, a few metres from the Iyana-Ilogbo bus stop on the Lagos/Abeokuta Expressway.
When the police and an inquisitive crowed swooped in on the ritualists’ den yesterday following its discovery, what looked like the remains of a male victim, clothes, shoes, wigs, a machete and bags were found at the abandoned building.
It was learnt that two persons, who had initially been taken to the den to be killed, escaped and efforts by the ritualists to recapture them proved abortive.
The failure of the ritualists to recapture their would-be-victims attracted the attention of passers-by, who thronged to the den and contacted the police at their Sango Ota station.
Angry residents broke down parts of the building which led to the discovery of decomposing and decomposed human parts.
Other members of the ritual gang were said to have escaped.
Confirming the development, the Ogun Police Command spokesman, Olumuyiwa Adejobi, said the den was discovered at about 7am on Saturday, and that the Divisional Police Officer in charge of Sango Division and men of the Anti-Robbery Squad acted swiftly and arrested two suspects.
Adejobi, a Deputy Superintendent of Police, said the suspects were found at the scene in possession of the lifeless body of a man believed to have been killed by their gang.
He said: “Items recovered from the scene include a cutlass, clothes, shoes and caps, the suspects were at an abandoned filling station (Ayokunnu), at Iyana-Ilogbo.
“We are also making effort to arrest the owner of the abandoned filling station while the suspects are under interrogation. The Commissioner of Police, Mr Abdulmajid Ali, has ordered that the case be transferred to the Criminal Investigation Department of the Command, at Eleweran, Abeokuta for further investigation”.
The Nation