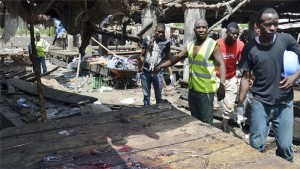 Boko Haram child “suicide bombings” have surged elevenfold in West Africa in the past year, with children as young as eight, mostly girls, detonating bombs in schools and markets, a leading charity has said.  One in every five “suicide bombers”  used by Boko Haram in the past two years has been a child, a report released on Tuesday by the United Nations Children’s Fund, UNICEF, said .

Suicide bombings have spread beyond Nigeria’s borders, with an increasing number of deadly attacks carried out by children with explosives hidden under their clothes or in baskets. “The use of children, especially girls, as so-called suicide bombers has become a defining and alarming feature of this conflict,” Laurent Duvillier, regional spokesman for UNICEF, told the Thomson Reuters Foundation on Tuesday.

“It’s basically turning the children against their own communities by strapping bombs around their bodies,” he said. There were 44 child “suicide bombings” in West Africa last year, up from four in 2014, UNICEF said, mostly in Cameroon and Nigeria. Some young children probably did not know they were carrying explosives, which are often detonated remotely, Duvillier said.

Boko Haram’s six-year campaign to set up an emirate in northeastern Nigeria has killed some 15,000 people, according to the US military. Outmanoeuvred after a regional offensive drove it from strongholds in Nigeria last year, it is increasingly using children to carry out attacks. The tactic has proved effective in increasing the number of casualties as people do not usually see children as a threat.