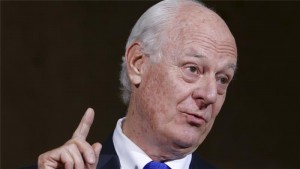 The UN special envoy for Syria has estimated that 400,000 people have been killed throughout the last five years of civil war, urging major and regional powers to help salvage a crumbling ceasefire.  Explaining that the death toll was based on his own estimate, Staffan de Mistura said on Friday that it was not an official UN statistic.

“We had 250,000 as a figure two years ago,” said de Mistura. “Well, two years ago was two years ago.”The UN no longer keeps track of the death toll due to the inaccessibility of many areas and the complications of navigating conflicting statistics put forward by the Syrian government and armed opposition groups.

Fighting has flared up in many parts of the country as the fragile ceasefire appears to be falling apart.  Government air strikes killed at least 13 in the eastern countryside of Damascus on Saturday, while air strikes and barrel bombs left several dead and injured in the Bab al-Tariq area of Homs, the UK-based Syrian Observatory for Human Rights reported.

De Mistura also appealed to all involved parties to help revamp negotiations between the government of President Bashar al-Assad and opposition groups.  “Yes we do need certainly a new ISSG at ministerial level,” the envoy said, referring to the International Syria Support Group which includes the United States, Russia, the European Union, Iran, Turkey and Arab states.