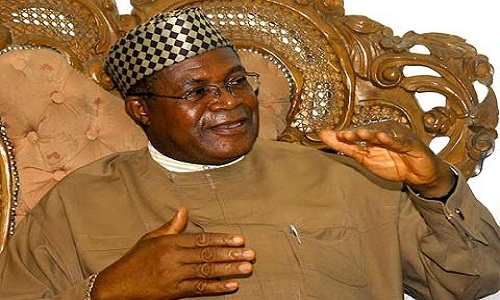 A former National Chairman of the Peoples Democratic Party, PDP, Chief Okwesilieze Nwodo, has denied reports that he has defected to the All Progressives Congress, APC.
It was reported earlier here that during an APC stakeholders meeting in Enugu at the weekend, Nwodo, represented by his wife, Dorothy, alongside other PDP heavyweights including former House of Representatives Speaker, Agunwa Anakwe; Senators Emma Agboti, Chris Adighije, Nkechi Nwogu, Ifeanyi Ararume and former Labour Minister, Emeka Wogu, defected to the APC.
But Mr. Nwodo, in a statement he personally signed on Monday, said while political developments in the PDP are “embarrassing and unexciting”, he is yet to dump the party.
The former PDP chairman faulted reports of his alleged defection to the APC, saying the unfounded reports were based on the activities of his wife, whom he described as an adult and capable of making her own political decisions.
“The former National Chairman of the Peoples Democratic Party PDP, Dr. Okwesilieze Nwodo, CON says his attention has been drawn to media insinuations that he has dumped the PDP and joined the ruling All Progressives Congress APC and wishes to state categorically that while developments in PDP is embarrassing and unexciting he is yet to dump the party.
“Dr. Nwodo, a pioneer National Secretary of PDP and former governor of old Enugu State said that its improper for the media to stand merely on my wife being present at a meeting that I was not, to conclude that I have joined the APC disregarding the fact that my wife as an adult has her own political life.
“As one of the founding fathers of PDP who has held the highest office in the party, I know the statutory procedure of resigning and would willingly do that if necessary”, the statement said.
Mr. Nwodo said although a number of issues within PDP remain embarrassing to the founding fathers, the truth is that “Am still a member of the PDP and has not joined the APC”.
He, therefore, called on his numerous supporters across the country, particularly in Enugu State, to disregard the purported story as his political direction would not be hidden if the need arises.