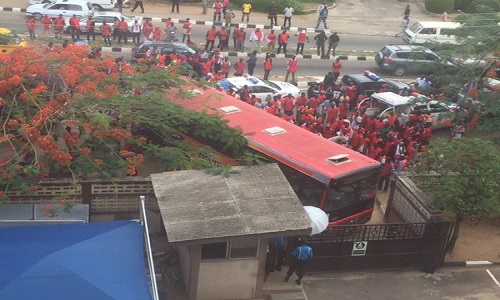 The Nigeria Labour Congress (NLC) and civil society groups are currently picketing the Ikeja Electricity Distribution Company in Lagos State following the recent sack of 400 staff of the company.
The protesters, who ordered workers of the company to exit their office in order to join the protest by 10am, were led by the General Secretary of Nigeria Union of Railway Workers, Segun Esan.
The protesters also shut the entrance of the power company and the adjoining roads.
The protesters displayed placards with various inscriptions such as “Fashola, leave power sector”, “Sai Baba stop privatization of power”, “We are tired of darkness”, etc.
They also chanted solidarity songs, demanding that the federal government do the needful in the power sector in order to save Nigerians from perennial darkness.
The action, which was the second in the last one month, was necessitated by the failure of the power company to rescind its decision to lay off 400 of its staff amid epileptic power supply, the protesters said.
The Spokesman of the company Felix Ofolue said his company has secured a court injunction to stop the action of the protesters.
In a related development, the company via its Twitter handle @IkejaElectric, described Monday morning’s picketing of its corporate headquarters as an act of sabotage.

Ikeja Electric considers it an act of sabotage to shut down power supply at a time when there is abject fuel… https://t.co/w4B9sbJZ9Y