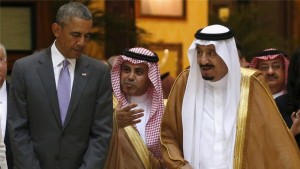 The United States will deter and confront aggression against Gulf Arab countries, which continue to have concerns about threats from Iran, President Barack Obama said after meeting their leaders to iron out strains in their alliance.

“I reaffirmed the policy of the United States to use all elements of our power to secure our core interests in the Gulf region and to deter and confront external aggression against our allies and our partners,” Obama said in Riyadh on Thursday after the summit with the Gulf Cooperation Council (GCC).

“Even with the nuclear deal we recognise collectively that we continue to have serious concerns about Iranian behaviour,” he said. There was no denying the strains that have afflicted ties between Washington and its Gulf partners, though they have continued to work together on shared concerns such as the wars in Syria, Iraq and Yemen.

“What is true between the United States and the GCC, as is true with all of our allies and friends is that at any point of time, there are going to be differences,” Obama said.  The GCC states believe the US has pulled back from the region during Obama’s presidency, giving more space to Iran. They were also upset by Obama’s remarks in a magazine interview that appeared to cast them as “free-riders” in US security efforts and urged them to “share” the region with Tehran.