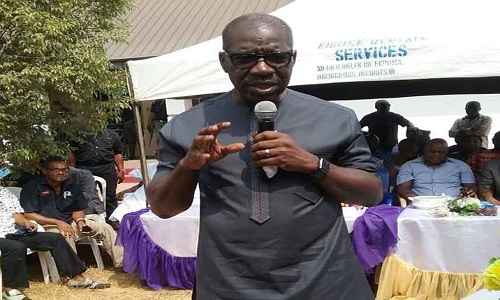 Ahead of the September 10, 2016 governorship election in Edo State, a governorship aspirant of the All Progressives Congress, APC, Mr. Godwin Obaseki, has declared that he is in the race for the Government House, not as a neophyte, but as one who has a clear understanding of the politics and needs of the people of the state.

Obaseki, who stated this when he visited the state leadership of the APC on Monday, expressed his unalloyed loyalty to the party and its leadership.

The Chairman of Edo State Economic and Strategy Team said he wanted to restructure the party in such a manner that it will help in executing policies and programmes of government for advancement of the state.

He also said that his mission was to continue with the developmental strides of the Governor Adams Oshiomhole-led administration, which he has been a key part of, since 2008.

“The reason I decided to join the governorship race is not far-fetched. In the last seven and a half years, I have been an integral part of this administration and I am proud to say that I am also one of the foundation members when the party came into being in the state. I understand the terrain perfectly, both politically and otherwise. I am not a neophyte in this business.

“As you are aware, we have accomplished quite a lot, even beyond the imagination of many because of the leadership provided by our governor and as his tenure is coming to an end, I am sure it is also your hope that we don’t lose all the advantages we have gained to make us the dominant party in Edo State.

“My interest in becoming governor of Edo State is to continue the achievements which we have accomplished to date. I know the need to ensure we continue to sustain those gains so that we remain the dominant political party in this state”.

In his response, the state Publicity Secretary of APC, Mr Godwin Erhahon, commended Obaseki for his visit, saying, “after the primaries, all of us are going to come together to fight the common enemy, so let us not exhaust all our armoury in fighting the battle when the war is yet to begin. We advise all of you to avoid abusive campaigns so that we can have hitch free primaries”.