May 29 Deadline For Abuja-Kaduna Railway No Longer Feasible, Amaechi Says, Explains Why 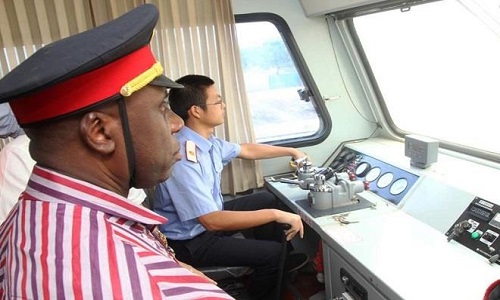 The May 29, 2016 date earlier announced for the commencement of the commercial operation of the Abuja-Kaduna standard gauge railway route is no longer feasible, the Minister of Transportation, Mr. Rotimi Amaechi, has said.

He made the announcement yesterday shortly after inspecting the project at Idu and Kubwa, Abuja.

The minister and his team also visited the Catholic Hospital, the Daughters of Charity of St. Vincent De Paul Hospital, Byazhin, Kubwa, where he resolved the knotty issues around demolition of their premises for a major alignment of the rail tracks to occur.

“The May 29 deadline isn’t feasible. I was pushing them to keep to the initial deadline but the team, the project consultant, in their wisdom said we may make mistake if we continue to push. They advise we allow the contractors follow their time table. They need at least one month to finish the alignment at Kubwa”, Amaechi explained.

“We have finally resolved what made us not to keep to our initial date of commissioning. The Daughters of Charity had refused to allow the contractors demolish their premises and strengthen the alignment. But we’ve negotiated and agreed that demolition should start from tomorrow (today) and that fencing will start today (yesterday)”, Amaechi said adding that by June, the project should be delivered.

The minister noted that at this first stage, about 1,000 staff would be engaged, who would be on every six kilometers of the way for maintenance purposes even as security issues were still being reviewed.