Home News Feed Yaya Toure Will Leave Manchester City In June, Says His Agent
Facebook
Twitter
WhatsApp
Manchester City’s midfield powerhouse, Yaya Toure will leave the club at the end of the season having not been offered a new contract, his agent said on Monday. 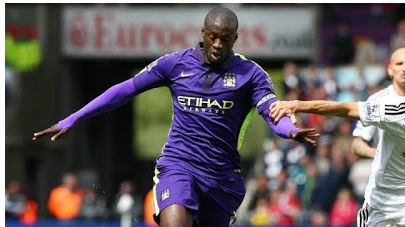 The 32-year-old Ivory Coast international, who was the African Footballer of the Year four times in a row from 2011, joined Premier League City from Barcelona for £24 million ($34.23 million) in July 2010.
Six years ago Toure was sold by Barca boss Pep Guardiola, who will replace Manuel Pellegrini as City’s coach when the Spaniard leaves Bayern Munich at the end of this season.
“We have waited too long. Manchester City promised a deal but nothing has materialised so Yaya will leave in June,” his agent Dimitri Seluk told Sky Sports television.
“Yaya is disappointed, of course, but he is a professional and he remains under contract so he will continue to do his best for City.”
Toure has been linked by the media with a move to Inter Milan who are coached by former City boss Roberto Mancini.
“Various offers have arrived for Yaya and we’re evaluating them,” Seluk said. “Inter? We’re definitely talking about a great club. Everyone knows about the relationship between Yaya and Mancini but… we haven’t made any decision yet. The Nerazzurri’s project is great and Inter is a fantastic club so it’s normal that they want a player of this level.”
Toure won the Premier League with City in 2012 and 2014, the FA Cup in 2011 and the League Cup in 2014 and 2016.