The Lagos state Police Command has called on those whose relatives are missing to come forward for possible identification of no fewer than 13 people who were reportedly killed in a fire incident at the Lotto area of the Lagos-Ibadan Expressway. 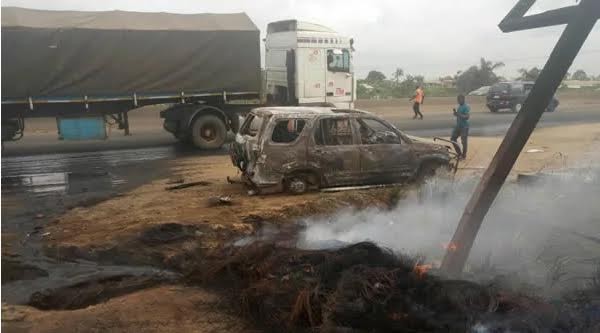 The Punch had earlier reported that a tanker loaded with Premium Motor Spirit, PMS, also known as petrol, went up in flames in Ogun state on Tuesday.

The incident occurred in the early hours of today at Loto bus-stop, Mowe, area of the state.
The tanker belonging to Total Nigeria Plc had skidded off the road in an attempt to avoid crashing into a herd of cows walking on the expressway.

In the process, four of the cows were killed and some of the fuel spilled on the road and into the gutter, before the tanker crashed before it went up in flames.

The herdsmen fled the scene immediately as residents attempted to mob them.

The Lagos state Police Public Relations Officer, Muyiwa Adejobi has confirmed the incident stating that, “The road was soaked with fuel after the tanker fell.
“The police and the fire service men were trying to neutralise the power of the petrol when fire broke out. The fire service truck, which was on duty, was the first to be burnt.

f3Four other persons were injured in the inferno, including an official of the Ogun State Fire Service, identified as Ayodele Adetayo.

The injured victims were said to have been rushed to private hospitals before being transferred to the Olabisi Onabanjo University Teaching Hospital.

Police officers attached to the Redemption Camp division were said to have removed the dead cows, and contacted Total to send another truck for fuel transfer.

Some residents came out and started scooping the fuel spilled into the gutter when a Sports Utility Vehicle, SUV, which had a burst tire drove on its rim and ignited a fire.

f4Fire then engulfed an 18-seater bus driving behind it, two Hilux vans, a Dangote truck and a fire service truck, which was rounding off operation.

The PPRO further added that, “No fewer than 13 people were burnt beyond recognition. About five vehicles were also burnt.

“We urge those whose relatives are missing to come forward for possible identification because for now we cannot recognise anybody,”Adejobi added.