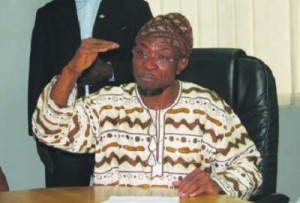 1.Aregbesola was formerly an activist.

2.Did you know that he was Lagos Commissioner for Works and Infrastructure before he ran for election in April 2007 on the Action Congress platform? Yes he was.

3.In May 2008, Aregbesola called over 100 witnesses and tendered 168 exhibits in his petition before the Election Petitions Tribunal, alleging violence and ballot boxes stuffing in the election.

4.In an October 2008 interview, he described Oyinlola as “a bully who came from a reactionary military arm”, stating that Oyinlola had done nothing for the people of Osun state. He also claimed that 12 people had died in the election violence

5.In August 2009 the police arrested Aregbesola, apparently for involvement in the alleged forgery of a police report on the conduct of the elections. Later that month he sought bail so that he could perform the lesser Hajj in Saudi Arabia

6.In August 2010 the police summoned him to make a statement about a 14 June 2007 bomb explosion near the ministry of water resources. Aregbesola denied any involvement, stating that he was in Abuja at the time

7.Justices of the Federal Appeal Court, Ibadan finally declared Aregbesola the winner of the 2007 election, ordering that he be sworn in as governor by noon on 27 November 2010

8.Mr. Rauf Aregbesola, was on Saturday 12th of April 2014 endorsed as the governorship candidates of the All Progressives Congress in the states gubernatorial election slated for the 9th of August 2014.

9.He was to seek reelection for a second term on the platform of the All Progressives Congress on the 9th of August,2014, contesting against Sen. Iyiola Omisore of the People’s Democratic Party and Akinbade of the Labour Party, who has now been declared wanted by the EFC. Having satisfied the requirement of the Law and scored the highest number of votes. He was declared the winner of the August 9th,2014 election and returned elected for another term of 4 years.