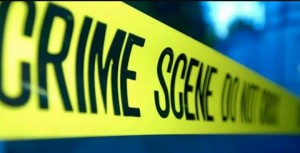 The rampant stories of couples engaging in fierce fisticuffs leading to the death of the wife or husband has not abated in Lagos state as man alleged of killing his wife on Friday has been hospitalised after collapsing.

Jafar Solugie, 50 was arrested and taken to the Lagos State Criminal Investigation and Intelligence Department on allegations of slitting the throat of his wife, Roselyn Solugie, whose body was found early Friday in their home at No. 8 Araromi street, Oshodi, Lagos.

It was gathered that the suspect began to act sickly and unable to stand without support before he collapsed and eventually rushed to Falamo General Hospital, Ikoyi for treatment.

The family of the deceased have vowed to seek justice as they believe he killed her. However, the accused brother claims that the same people who murdered Jafar’s wife also attacked the suspect.

It was also gathered that the deceased sold frozen foods at Ijora and the cause of fight between the couple has not been released yet.