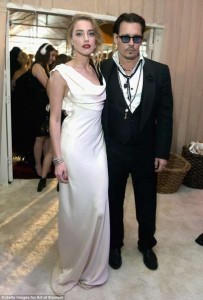 The nasty divorce battle between Amber Heard and Johnny Depp, is getting dirtier by the day.

TMZ reports that the Hollywood actress has reportedly filed a domestic violence restraining order against Depp, complete with photographic evidence of the alleged violence she had suffered.

The actress who filed for divorce on Monday, May 23, 2016, after barely over a year of marriage to Depp, had reportedly cited irreconcilable differences in her divorce petition as the reason for their divorce.

Following the revelation that Heard’s request for spousal support had been turned down, the actress seems to be coming up with new reason’s to cash out from the divorce.

Spousal support reportedly takes into consideration several factors such as, how long the marriage lasted and the needs of the individuals involved.

Considering the fact that Depp might lose $200 million, which is half of his fortune to Heard, due to lack of a prenuptial agreement, Mirror UK reports that the 52-year-old actors seems prepared for battle and has reportedly hired top divorce lawyer, Laura Wasser, to handle the case.