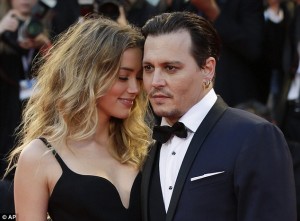 A US document has revealed that film star, Johnny Depp and his actress wife, Amber Heard are to separate after just 15 months of their marriage.

30-year-old Amber had earlier filed for divorce in a Los Angeles Superior Court citing a full blown feud between her and Depp’s family, she describes as ‘Irreconcilable differences’.

According to reports, Depp, 52, who met his wife while co-starring in the 2011 film ‘The Rum Dairy’, has asked a judge to dispense Heard’s claims.

Already, Heard has listed the separation date as Sunday.

The breakup comes just days after the death of Depp’s mother, Betty Sue Palmer, 81, who died on 20 May in Los Angeles following a long illness.