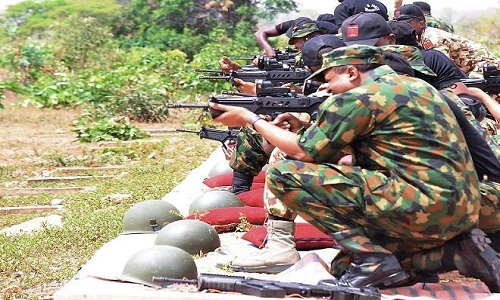 The Nigerian Army Armoured Corps, Bauchi, says it has concluded plans to host Combat Arms Training scheduled to hold from May 30 to June 4.
The Corps Assistant Director in charge of Public Relations, Victor Olukoya, in a statement on Sunday in Bauchi, said that the Chief of Army Staff, Lt-Gen Tukur Buratai, will declare the training open.
The training has as its theme, “Repositioning the Combat Arms to be Professionally Responsive in meeting the Constitutional roles of the Nigerian Army”.
“The exercise is lined up with series of activities that will involve movement of troops, display of equipment and lectures.
“This will eventually culminate into firing of live weapons at the Victor Kure Armoured Range in Gaji village along Bauchi to Jos road”, Olukoya, a Captain, said.
The Corps, therefore, urged members of the public not to panic upon hearing sounds of military equipment or noticing movement of troops during the period in question.