IS THIS a sneak preview of Barcelona’s new mega-money kit? 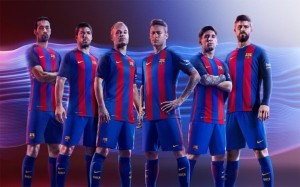 The former European champions are due to unveil their new strip on Monday May, 30.

According to reports, the Catalans have entered into a mega ten-year kit deal with American sportswear giants’, Nike. A deal reportedly worth over £76MILLION annually.

From inception, the Catalans’ moto ‘Mes Que un Club’, which translates to ‘More Than a Club’ extended as far as kit sponsorship from their inception in 1899 all the way until 2011.

They refused to have a label on their shirts as they lived by the rule that nothing was greater than Barcelona.

However, after being catapulted to the greatest team on the planet following unprecedented on-pitch success, things were forced to change behind the scenes with their three-year sponsorship deal with airline, Qatar Airways.