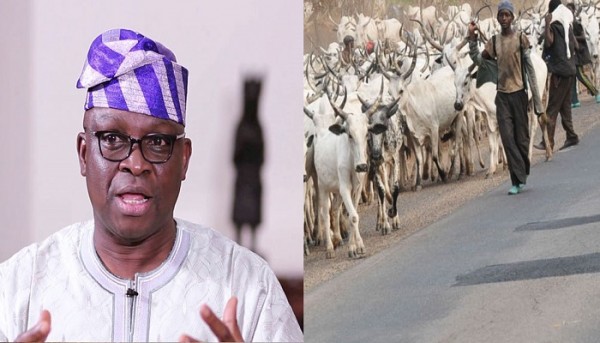 Governor Mohammed Abubakar of Bauchi State has described the directive by Governor Ayodele Fayose of Ekiti State, banning cattle grazing in the state as divisive and unbecoming of a statesman.
Gov. Fayose had in the wake of an attack on Oke-Ako community of the state by suspected Fulani herdsmen, banned the movement of cattle from one place to the other in the state as part of security measures to forestall a recurrence.
The Bauchi governor in a statement issued Thursday by his Press Secretary, Abubakar Al-Sadique, said Fayose’s statement on Fulani herders is unbefitting of national leaders, especially state governors.
Gov. Abubakar maintained that the Ekiti governor’s statement is as condemnable as the clashes between farmers and herders.
Mr. Abubakar, who only just returned to the state yesterday after spending one week on official visit to Beirut, the capital city of Lebanon, expressed his worries that the country has not been able to proffer a permanent solution to the clashes which have resulted in the avoidable death of hundreds of Nigerians in different parts of the country.
He lamented that instead of dialoguing with all stakeholders to address the ugly trend, some leaders were resorting to making divisive public pronouncements.
“In a democracy, provisions have been made for anybody that is aggrieved with anything in the country to seek redress. Instead of resorting to making such public pronouncements, there are laid down laws to follow.
“On this matter, I am gladdened with efforts of both the Presidency and the National Assembly which is conducting public hearings with a view to putting an end to such incessant and senseless killings”, the Governor said.
Gov. Abubakar stressed that Nigeria was in dire need of everybody’s contributions for it to be great again and for the economy to bounce back.
He, therefore, urged leaders to be mindful of their public utterances, especially on matters that border on national unity and security.