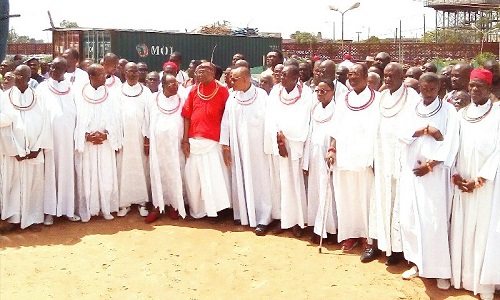 All residents of Benin Kingdom have been advised to bury their dead as all funeral rites would be banned from the date of the announcement of Emwinekhue (burial ceremonies) of the Oba of Benin, Oba Erediauwa.
The Benin Traditional Council, which gave the counsel on Wednesday, said the Emwinekhua would soon be announced.
Speaking at a press, the Iyase of Benin Kingdom, Chief Sam Igbe, urged all residents in the kingdom to respect the custom and tradition of the kingdom and be law abiding.
Chief Igbe said all markets in the kingdom have since been reopened as they were supposed to be closed for three days after the transition of Oba Erediauwa was announced.
The Iyase also said all male citizens of Benin Kingdom were expected to as a rule, spot a clean shaven head in obedience to Benin tradition.
He stated that friends and well-wishers of the kingdom might wish to join citizens of the kingdom to clean shave their hair.
“All Chiefs, Enigie, Priests and palace functionaries who are entitled to wear beads would seize to wear beads.
“Instead they will wear omonorhue or white thread (Ikhian) until further notice”, he said.
Chief David Edebiri, the Esogban of Benin kingdom, said sanctions from the ancestors await anyone that fails to clean shave his hair.