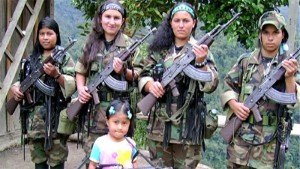 Colombia’s Marxist FARC rebel group has agreed to remove child soldiers from its ranks as part of the peace deal it is close to signing with the government. The Revolutionary Armed Forces of Colombia (FARC) agreed on Sunday to “implement departure of those under 15 years of age as soon as terms are agreed upon”, the parties said in a statement in Cuba, which is hosting peace negotiations.

Among the terms that must be decided is how the children will be transitioned and reintegrated back into society. News of the agreement comes as the FARC and Colombia work on terms of a bilateral and definitive ceasefire, one of the last major points before a peace deal can be struck to end Latin America’s longest-running and last civil war.

The two sides did not immediately state how many minors would be exiting FARC’s ranks. After progress this week in talks, President Juan Manuel Santos said Friday that he hoped the war with FARC would end “very soon”. Juan Fernando Cristo, the interior minister, said on Wednesday that peace talks were in the “home stretch” and that Colombia plans to hold a referendum on the deal by September.

The Colombian conflict has drawn in several leftist rebel groups, right-wing paramilitaries and drug gangs. It has left 260,000 people dead and 45,000 missing, while another 6.6 million have been uprooted. Human rights groups say atrocities have been committed on all sides.