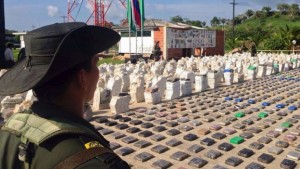 Police in Colombia say they have seized their largest ever domestic haul of illegal drugs – nearly eight tonnes of cocaine. The drugs had been hidden on a banana plantation near the north-western coastal town of Turbo. President Juan Manuel Santos congratulated officers on Twitter, saying: “Operation in Turbo seized the greatest amount in our history.”

Police say the drugs belonged to Clan Usuga, a criminal gang. Three suspects were arrested and another three escaped, a statement read.  Nearly 1.5 tonnes of the drugs had been wrapped and were “ready to go out to the export market”, Defence Minister Luis Carlos Villegas said. It was the largest seizure of cocaine on Colombian territory although there may have been slightly larger cocaine seizures at sea, he added.

Clan Usuga is mainly engaged in drug trafficking but has also been accused of extortion, illegal mining, forced disappearances and murder, correspondents say. Colombian police estimate the gang has about 2,000 active members. Over the past five years, the security forces have captured 6,700 members of the group.