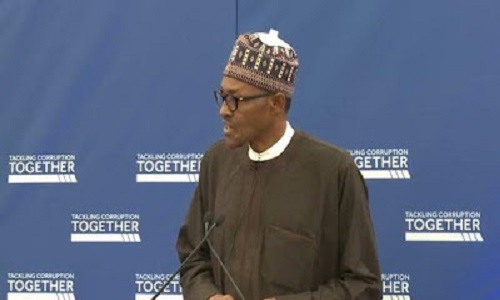 President Muhammadu Buhari on Wednesday said he would not demand an apology from British Prime Minister David Cameron over his comment that Nigeria is a “fantastically corrupt” country.
Mr. Cameron was caught on camera describing Nigeria and Afghanistan as being amongst the most corrupt countries in the world.
The comment was made last month at one of the events marking the 90th birthday of the Queen of England, Elizabeth II, but short footage of the conversation was only just aired yesterday by British television station, ITV News.
The Presidency said in an earlier statement that it was “embarrassed” by the comment as it was not reflective of President Buhari’s anti-corruption disposition
Speaking at the venue of the conference, the BBC quoted Mr. Buhari as saying instead of an apology, he would want the repatriation of assets stashed in the UK by corrupt Nigerians.
“No. I am not going to demand any apology from anybody. What I am demanding is the return of assets”, he said.
The president also said he had already “mentioned how Britain really led and how disgraceful one of the Nigerian executives was”.
Making veiled reference to a former Governor of oil-rich Bayelsa State, late Diepreye Alamieyeseigha, who jumped bail in the UK under controversial circumstances following his arrest on corruption allegations, Mr. Buhari said “he (Alamieyeseigha) had to dress like a woman to leave Britain and leave behind him his bank account and fixed assets, which Britain is prepared to hand over to us. This is what I am asking for”.
“What would I do with an apology? I need something tangible”, President Buhari reiterated.