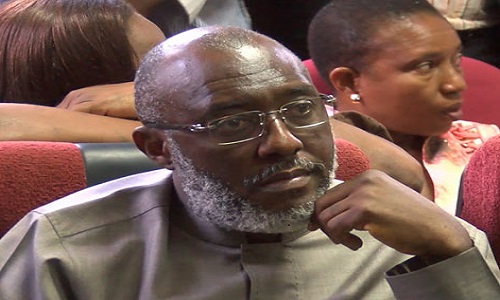 The bid by Peoples Democratic Party, PDP, chieftain, Olisa Metuh, to halt his trial temporarily on health grounds, has met a brick wall.
Mr. Metuh and his company, Destra Investment Limited are being tried by the Economic and Financial Crimes Commission, EFCC, for alleged unlawful receipt of N400million from the Office of the former National Security Adviser, Sambo Dasuki.
They allegedly received the money for contracts that were not executed.
The EFCC also accused the PDP chieftain and his company of engaging in money laundering to the tune of $2million.
He denied all the allegations.
Metuh on Monday submitted a medical report issued by one Dr. O.O Oyeleye, a consultant Neurosurgeon at the National Hospital, Abuja, before the Federal High Court, to support his request for adjournment of his trial to enable him observe bed rest in the hospital.
It would be recalled that the former PDP spokesman yesterday told reporters that he needs to travel abroad for spinal cord surgery following a fall from his seat during a meeting of his party in Abuja recently.
He had also reposed confidence in the ability of his lawyer Emeka Etiaba (SAN) to fully acquaint the court with details of the true state of his health.
However, that was not the case on Tuesday as the trial judge, Okon Abang, picked holes in Metuh’s medical report, saying it did not state the duration of the politician’s supposed bed rest.
Mr. Metuh was absent in court during today’s proceedings.