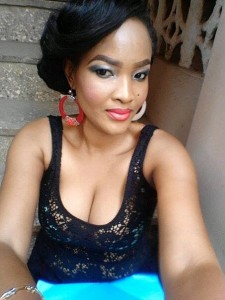 One of Nollywood’s fast rising actresses, Crystabel Goody who was banned from the Actors Guild of Nigeria has stated that God is punishing Ibinabo Fiberesima for banning her.

Crystabel made the news after her fellow actress, Princess Chineke accused her of biting her thigh while on set of a movie.

Fiberesima who was the AGN president at the time banned her.; the ban has now been lifted by current AGN President, Emeka Ike.

Crystabel in a recent interview with Saturday Beats said,

“Ibinabo was accused of killing somebody and she was walking on the street, bragging before the law caught up with her. I believe that it is because she passed a wrong judgement against me that God is punishing her. Her ban against me was flimsy and uncalled for even though it has been lifted by Emeka Ike.

“I was in her office and she told me that I was a very decent young lady from the way we were chatting, my lawyer was there and I am quoting her verbatim. She told me not to worry that the matter was just a fight between two people. She advised that I work on my temperament. She said that she would settle the matter and reverse the ban. She even went as far as taking me to the stadium where they had their veteran football competition and introduced me to the chairman, board of trustees and some directors. As she was introducing me, some of the men told me that I didn’t look the part of a fighter and that I should be more careful next time and avoid people who would trigger my anger. She promised the man that she would take control of the situation.

“She asked me to come to her office the next day and I was there with my lawyer, we waited for seven hours but Ibinabo refused to see me. She gave a flimsy excuse that the other actress was not available because she went to treat her wound. My lawyer was of the opinion that the other girl did not have to be there, that all Ibinabo should have done was to reconcile us and reverse the ban she placed on me. She is certainly paying for the wickedness she meted out on me because God does not joke with me. I don’t go about looking for trouble; I live a very private life. I am not a saint but I try my best to help people.”